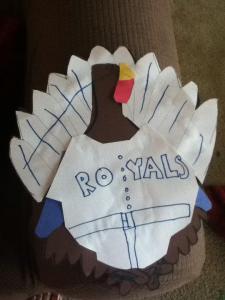 My son Ian made this turkey. No, it’s not a Texas Rangers turkey, and he loves the Rangers. During games on TV, he would put on the foam finger and yell out “Go Rangers.”  This year, Jayson was a Royal, and my child came on board with me. So when his teacher asked the class to disguise a turkey so he could make it past Thanksgiving, Ian came up with a baseball player. And I MAY have influenced which team to pick. OK, I told him, “Let’s make it a Royal.” He likes his Royals turkey. I am very lucky. I have two boys, and they have autism, and they don’t like a lot of things, but they do like baseball. We will watch the games, and for that, I am very grateful that I can share this with them. My oldest, Ben, who has more severe autism, is starting to figure out how the game is played, and he knows the bases, and it’s starting to click for him. And for that, I am very thankful. Ian is my youngest, and he loves all the clapping and loves to scream “CHARGE!” and “LET’S GO RANGERS! LET’S GO!” Yeah, the apple didn’t fall far from that tree 😉 I am so thankful for a life with baseball and two kids to share it with. Happy Thanksgiving.