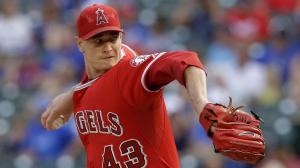 What Miss Baseball?!? He’s an Angel, and you are a Ranger fan. I am a Ranger fan, and the MLB package won’t let me watch Ranger games live, so while I wait for the game to be over, I watch other teams, Baseball is a wonderful game, no matter who is playing. I saw Garrett’s injury last season live, This post kept me up last night. You see, Miss Baseball tore up her knee, too, in very much the same fashion as Garrett, I could describe to you everything I went through, but it’s too hard to think about even 13 years later. I will say this: If you can walk, don’t take it for granted because learning how to walk again was the hardest thing. Garrett just touched my heart. I wrote him a fan letter and told him I was thinking about him. And then I started following him on Twitter, and he has a wonderful upbeat and positive attitude, and I knew he was going to make it. Then I saw this,Tweet:

This got me all sorts of happy because there is a point in your recovery when you know you are going to get back. I am so excited for Garrett. There was an article from the L.A. Times saying Garrett was back on track after the injury to his patellar tendon .My injury was not as bad as Garrett’s but I defy the odds as well. I was supposed to be on crutches for six months, I was off of them in six weeks, And in eight weeks, I was working in promotions for the Texas Rangers, (Would you like a bobble head? Only one please. No! You can’t take them all. AHHHHHH! Don’t knock me over!) He looks like he is, too. Never discount the human spirit and drive. It can do anything. Garrett, I am so glad you are coming back. I hope you have a great season and beat every team, other than the Rangers. What?!? I am still a die-hard Ranger fan.

If you would like to read more about Garrett’s comeback Check out this article. http://www.latimes.com/sports/sportsnow/la-sp-sn-angels-garrett-richards-20141103-story.html