Someone call 911! Miss Baseball has had a stroke. Who is Gabe Kapler?! OK, OK put down the phone! I know who Gabe Kapler is. I thought that was a better title than “How I Accidentally Became a Gabe Kapler Superfan.”  Well, it’s Thursday, so for Throwback Thursday, I thought I would tell you the story of how I got to meet two different Gabe Kaplers.

Well, it all started with a meet-and-greet and my fandom of Rusty Greer. I got up to the mall at 7:30 a.m. and was first in line. I was going to meet Rusty. I was so excited I couldn’t stand myself. I saw another name. Who is Gabe Kapler? I call my father. “Who is Gabe Kapler?”

His response: “I told you, the pretty boy we got in the Juan Gone deal, the one who’s really into fitness.”

“Oh yeah, I remember now. Thanks.”

I didn’t have anything for Gabe to sign. Rusty was going to sign my Greer jersey, but what did I have for Gabe? Oh, I know, I will take off my ball cap. He can sign that. After hours of waiting Rusty, is there and there is another guy wearing a very dorky track suit. You know, those were really popular in the day, but as a girl, I hated how guys looked in them. Plus, he was wearing Michigan colors, blue and gold. In Texas, that is sacrilege. Thanks to a very nice security guard, I got to meet Rusty one on one before the signing. He was so happy that I had waited so long to see him, he hugged the stuffing right out of me. I got a wonderful picture with Rusty. 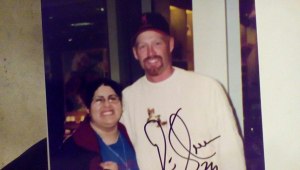 Coming off of a high of meeting my favorite Ranger of all time, and getting the best hug to this day, (yes, it’s been 14 years and it’s still the best hug ever) I didn’t know Gabe. I walked up and gave Rusty my jersey and asked Gabe to sign my hat. Rusty looks at Gabe and says, “She has been waiting for us since 7:30.”

Now Gabe looks right at me and says, “Oh really? Well, thanks for coming out,” and signs my hat. When he gives it back, he smiles.

I would like to tell you I was cool, but nope, I was a dork. I said “Thanks!” in a high-pitched voice, giggled and turned three shades of red. I was completely flustered. He was the most beautiful man I had ever laid my eyes on.
I was on a double high! Now I needed a new jersey, now that Rusty had signed my old one. You guessed it! 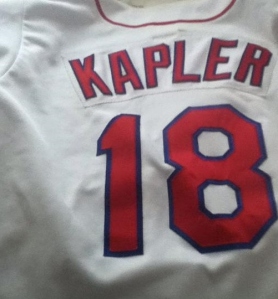 I got stopped on the street. “I love your jersey! Oh, he’s so gorgeous!  Gabe “the babe” Kapler, as he would be called, stole a lot of hearts in Texas. He was a good ball player and became a fan favorite. (Kap likes stats, so his WAR with the Rangers was a 2.8.)  Gabe went off to the National League, more specifically the Colordo Rockies, and I lost track of him until 2003, when I saw he was with the Boston Red Sox.  I got really excited seeing him play in the playoffs and the go on the the World Series. I saw him from time to time playing for other teams, then he left baseball and I didn’t think much of Gabe until about  October of this year.

I got Royal fever bad. I had not been following baseball for a long time, and I was starting to come back to it. When I was on Twitter, I saw Gabe and someone else talking. Nothing really noteworthy, but I saw him and went “Is that Gabe, the Rangers’ Gabe?” Sure enough, it was. I clicked follow and saw he was into metrics and then he made a post:

Communicating openly is the greatest gift you can give someone, personally and professionally. http://t.co/Q38DROeF10

I was really moved about what it said. You are not doing anyone any favors by sugar-coating things. Be direct and be honest.  Well, it made me realize how important honesty was to me, so I told Kap.

@hollieham0 I really appreciate that, Hollie.

Giggle! I guess old habits are hard to break.

Now I read Kap’s blog every day. He is also Kap to me, no longer Gabe “the babe.” I have learned more from him in three months about health and fitness than years of reading fitness magazines. What do you eat when you are sick? Berries. Is milk a bad thing to drink when you are sick? NO, it can help you get better faster. ( I tested both theories, and for me, they worked wonders.) Kap takes on any topics and responds to our questions. He will hear theories and question them, he might even do an experiment. Like he heard going grain-free would make you feel better. So he is now going grain-free and testing to see if it is better. (I’m not going to update you, you have to go check out the blog.)

I don’t know how else to say this. Kap, your shirt looks good on me. 🙂

His blog, which you can find on Kaplifestyle.com,  has a whole community. I have never felt more welcomed. As I read the blog, I thought of what I would want to say and what was important to me. I then became inspired to write my own blog, this one about my love of baseball. Kap has even gotten me into metrics, which I never thought I would like, but it’s really fascinating the more I read into it.

It always amazes me how people impact your life. The right person saying the right thing at the right time can really change your world. So, Who is Gabe Kapler?  A loving father, a writer, a coach, an advocate, a motivational speaker, a researcher, a scientist  and so much more. He reminds me of the old adage to never judge a book by its cover. But sometimes, a really good book has a really beautiful cover.