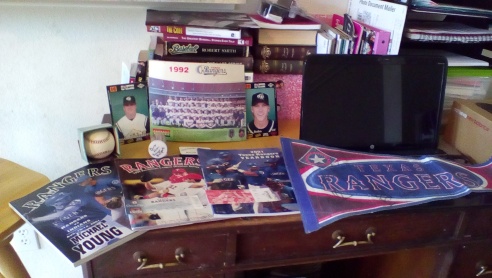 So as you may know, I am a avid follower of Kap Lifestyle Gabe Kapler’s blog about health and fitness. In a resent post, he discussed the benefits of getting rid of clutter. Check it out here:http://kaplifestyle.com/2015/03/organization-and-clutter

well I decided to clean out all my clutter which was surprisingly easy and mostly paper. I dug around my closet and found this box, and it was full of my baseball stuff. It was like a time capsule of all the baseball stuff I had collected. Thanks Gabe Kapler, if I hadn’t uncluttered I would have never found all these wonderful things.

The items include. a signed banner, a program from a regular game in 2001 and a program from the 1999 division series. and the 2001 year book. a signed Kapler baseball, (its faded its 13 yrs old) dirt from the warning track from The Ballpark in Arlington. a team photo of the 1992 Rangers. We are going to go over all this stuff later but today here are some pictures from  the 2001 yearbook 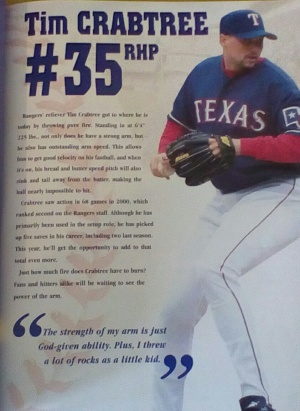 What a wonderful discovery to find another signed item of Frank Catalanotto. I didn’t remember either my signed Kapler ball, I don’t know if it can been seen on film but its there just really faded and even though it wasn’t exposed to light it still fades away. so tip use a Sharpie. Today was like finding money, it was wonderful to remember when I got the book and when I saw these guys play ball.