I love to stay up late, i know I should go to sleep but in the quiet of the night I get a second wind and my mind picks up. Tonight I was on Twitter and there was a hashtag #makebaseballexciting. I didn’t bother to see the origin of the hashtag but I read a few of the suggestions. Some wanted monsters and pigs and bulls to be put on the field at some point. Others wanted some sort of exploding device and my  personal favorite of the suggestions nudity.

None of these things will make baseball more exciting, the animals would tear up the infield, we have enough problem with pitchers arms that arming them with explosives seems counterproductive and the nudity makes me smile as I remember fondly watching a certain visiting  baseball player come to batting practice in nothing but slide shorts, hes one of the biggest names in baseball and no I will never tell you the name, but he came out and this was before any of the fans were in the park, but I was there thanking all the luck I had to work at a major league ballpark. he step to the plate and his body was magnificent, As he moved I could make out everything. After his batting practice was over I was sorry I couldn’t smoke in the stadium.

All of the suggestions while funny, just reminds me how non fans don’t get it. Baseball is exciting, There is nudity, have you seen the uniforms, I am sorry they leave nothing to the imagination. To this day I don’t understand why more women who enjoy the male body are not at baseball games.  There are women who will line up for Magic Mike but not Mike Trout, have you seen Mike Trout?

or my personal favorite Bryce Harper. 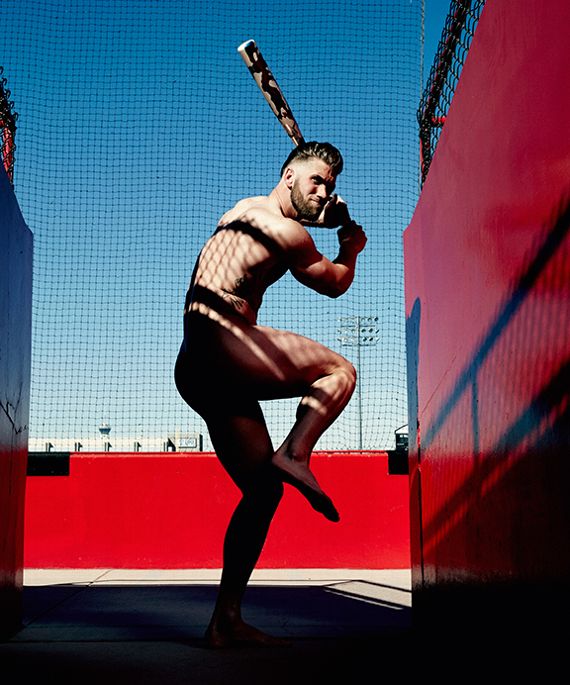 or watch Justin Verlander throw a fast ball, that sound of the ball hitting the catcher mitt, HOT!

There are explosions, one minute the ball is going from one glove of the pitcher to another glove of the catcher and then BOOM! The ball will fly out into the stands and hell sometimes into the water, or in Giancarlo Stanton’s case clear out of Dodger Stadium.

Then another explosion happens when a outfielder make a diving leaping catch.

you jump up and scream amazed at the athletic ability.  or how could I forget if the birds aren’t careful they can become a feather bomb.

Animals on the field, squirrels and cats, and birds and dodger stadium had some skunks. They variety of antics make wonderful highlights and bring a little comic relief to the game.

#makebaseballexciting, It is plenty exciting, don’t believe me, well then come to a game and pay attention because you are missing all the excitement.